Cluster Maps are Back

Look! We have a cluster map again! I'm so thrilled I might even have to start blogging again. OK, maybe not but we'll see.

Here's what happened. I've been crocheting my heart out, making custom afghans, dish cloths, pot holders, market bags, rugs, and more. It's become a near obsession and it's taken time away from my photography and writing. So, has it been long enough that I can take time away from my crocheting to let you know what's going on here in Cotacachi? We'll just have to see how it goes.

I miss all of you and that is probably the thing that will get me to write more than anything else.

Email ThisBlogThis!Share to TwitterShare to FacebookShare to Pinterest
Labels: Everything Else
Location: Cotacachi, Ecuador

Just a quick note to say how sad I am that someone hacked the Cluster Map people. It was always so much fun to go look at the places people lived who had come to visit my little blog. Now all of that is gone. They seem to be working on getting it back. I hope it's possible.
Posted by Cynthia at 7:43 AM 2 comments:

Email ThisBlogThis!Share to TwitterShare to FacebookShare to Pinterest
Labels: Everything Else 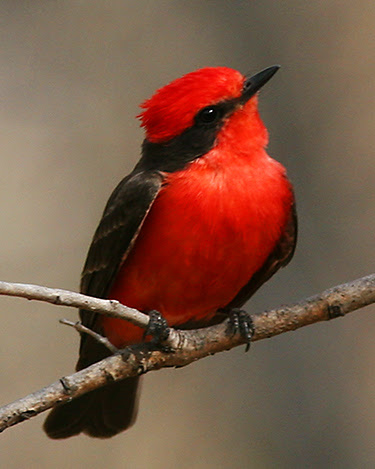 I've been pet sitting for far longer than I'd like to think about but perhaps more on that later. In the meantime, my current job gives me an opportunity to watch one of our local colorful characters. Isn't he amazing? I can't take credit for the photo. I tried to get a good one but it just didn't happen. Isn't he beautiful? I suspect I've seen his wife but didn't know it because she is so much less showy. 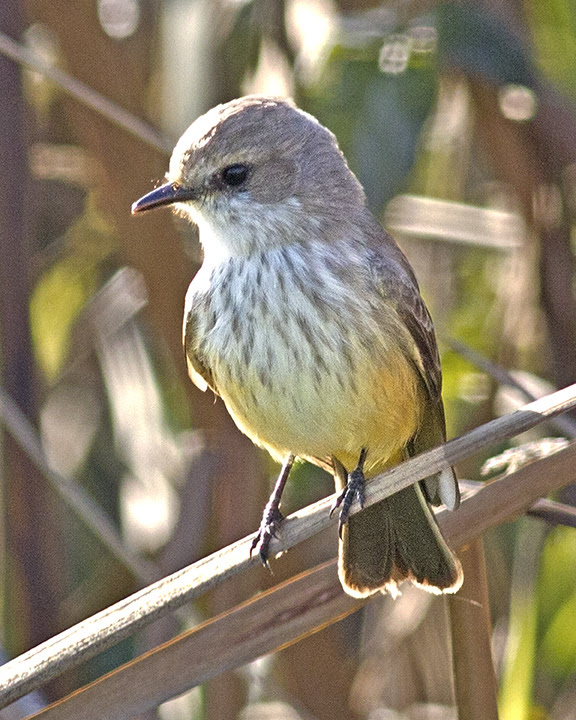 Actually, this female is, according to the photographer, a one-year-old female. He says that the yellow will turn to pink as she gets older. That's a far cry from her husband's coloring. Now that I know what she looks like, I'll watch for her as well.
Posted by Cynthia at 7:18 AM 2 comments:

The other day my friend and I were walking down the street towards her house and almost missed the basket of avocados in the doorway of a store. The sign in the basket said "10 for $1." Yes, $1 for 10 avocados and they were big ones. I'm happy when I can get 4 big ones for $1. Well of course we got 10 of them. We shared them because neither of us could think of what we'd use 10 for all by ourselves. I know, they freeze, but that requires room in the freezer and I have mine pretty full right now.

Then, right behind the avocados were a box of lovely tomatoes. There wasn't a price on those so I asked. They were $1 per kilo (2.2 pounds). OK, I can do that. There are prices like that fairly regularly (well at least for the tomatoes) and when they're in abundance you can get lemons 20 for $1. That's when I make the most lemonade and lemon pie (key lime using lemons instead).

I've been here two years and I still get excited about the price of fresh produce.

Many of you have been missing my blog posts--I've been missing putting them up as well. These past few days have given me an incentive to want to get one up for all of you but especially for my Mom.

Mom fell and broke her hip on Thursday (not to worry, she's a tough woman and is doing fine) then had surgery to repair it on Friday--her birthday. As my middle sister said, "What do you give a woman who has everything?" Well, I'm giving her a blog post. It's a little late but here it is.

By the way, she went home from the hospital today and rumor has it she's ready to take on the world--well, maybe not the whole world but at least her little corner of it.

The raffle afghan our needlework group, Loose Stitches, has been working on is finally complete! There will be a whole blog post about it but here are the photos to start you off. I took them when I was kitty sitting and Little decided there was no way I was taking photos without her Good Housekeeping Seal of Approval in full evidence. 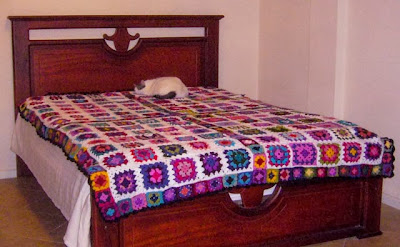 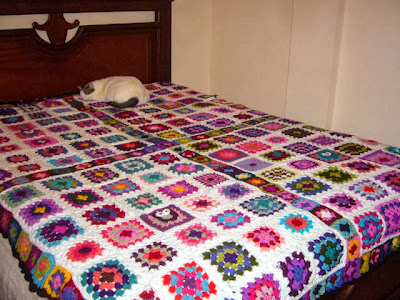 While we're talking about animals, these guys looked so cute up on their roof. Dogs frequently live on roofs here, especially when the family doesn't have a back yard for them to play in. Thus they are called roof dogs. These two were keeping a close eye on the folks walking past on the sidewalk below them. 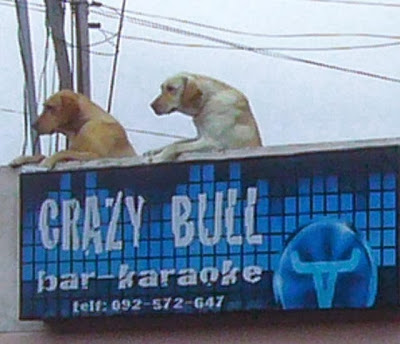 Of course I took tons of photos of kids.  These are my favorites. 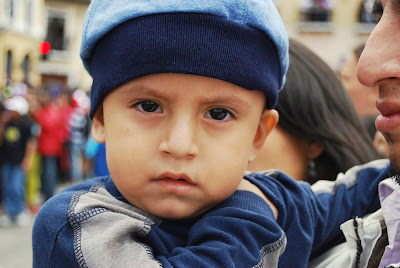 Such intensity--he's not exactly sure what he thinks of the camera. 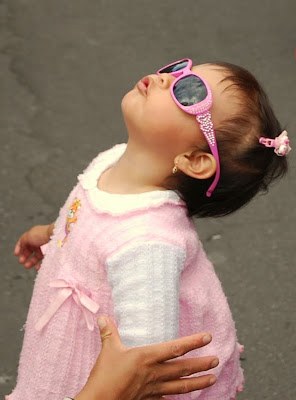 Need I say anything about this one?  I think not. 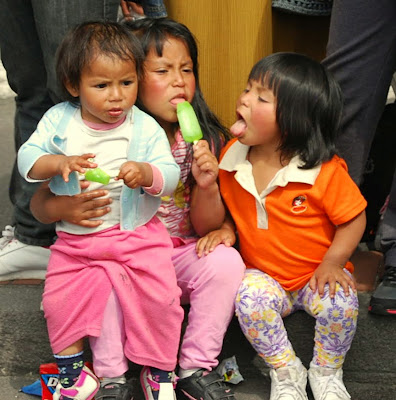 Three kids sharing a popsicle is frequently going to end up with someone not getting what they want. 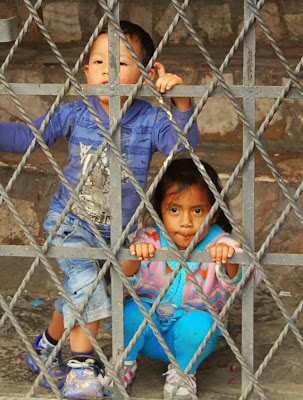 Behind bars--it was just the security gate at their apartment building but it makes a cute photo, don't you think?

I think that's pretty much it for my trip to Quito.  I loved being there and I loved coming home.

Email ThisBlogThis!Share to TwitterShare to FacebookShare to Pinterest
Labels: Travel

After spending so much time in little Cotacachi, life in Quito was so very different.  I loved it and as whoever it was who said it's a great place to visit but I wouldn't want to live there reflects my feelings totally.  Here are some of the fun shots I got of life in the fast lane. 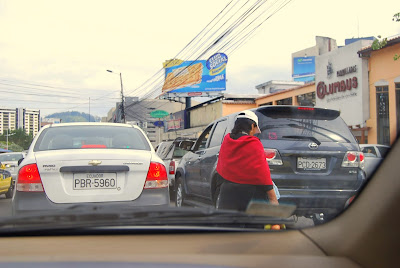 Wherever we went, there were people wandering up and down the streets--in traffic--selling things. They do it here out of baskets and wheel barrows on the sidewalks but not in Quito! 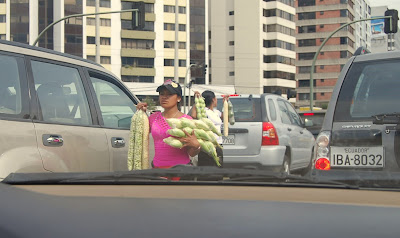 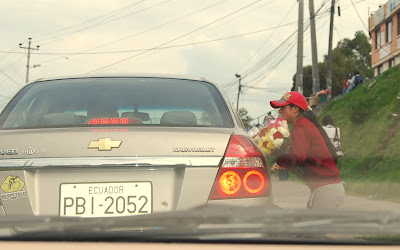 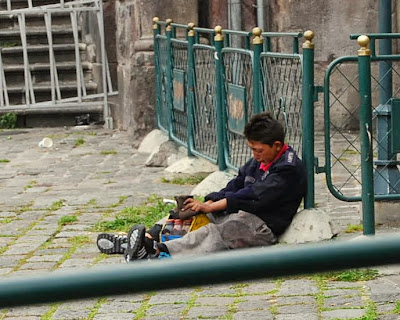 Not everyone was happy.  This poor, little shoeshine boy was sitting in the plaza crying.  I don't know why but he just moved me so much. 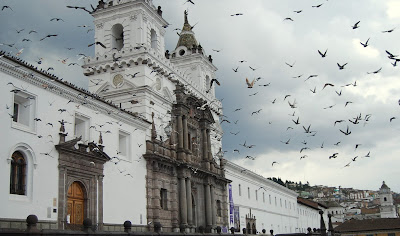 Here's my homage to Alfred Hitchcock--for those of you who are too young to remember it, look up The Birds. 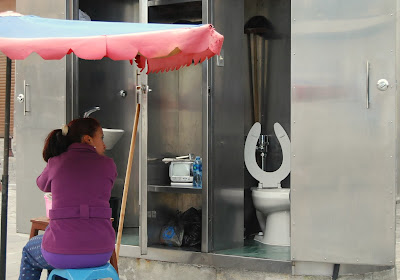 I HAD to take this photo!  I couldn't resist.  This is a public bathroom in Old Town Quito.  The attendant is sitting under the canopy with her little change box, watching her tiny TV that's in the space between the two baños.  You may note a distinct lack of toilet paper.  Not that it's always the case but it's always wise to BYOTP. 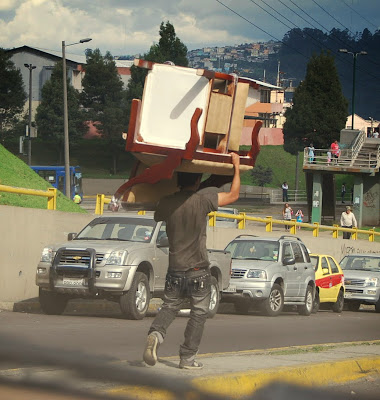 Look carefully at the furniture this one man is carrying on his head. There's a sofa, two chairs, and a table of some sort.  You really can't see all of it but I was watching someone else load it on.  I'm not sure where he's taking it.  He's in the center island and there's another wall just like the one in this view on the other side of the street.  He is obviously going quite a ways.

One of my favorite public pieces of art.  I really wish I knew what they were hold onto but it was too small to see while driving past. 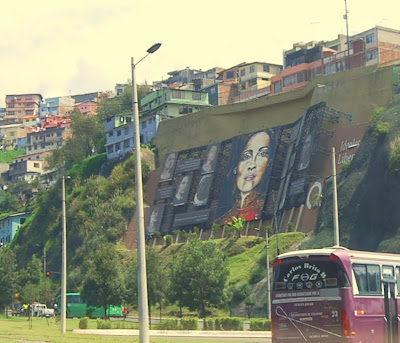 This is much better viewed head on but that wasn't possible so I got what I could.  These are women of import in Ecuador. 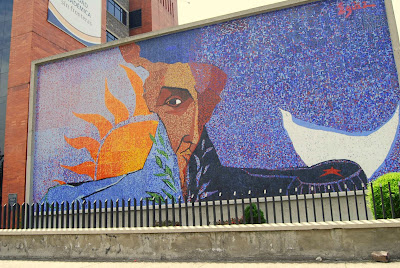 The public art is everywhere and quite impressive.  If you look at the sign above this mosaic, it gives you some idea of just how large it is. 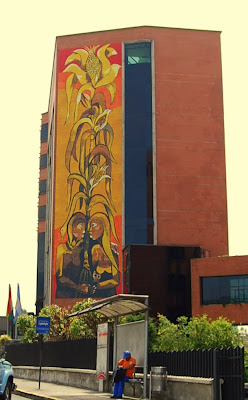 I suspect this one was commissioned by the building owners.  This building is about eight stories high. 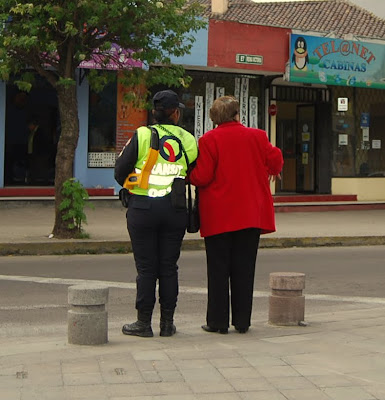 The police can be very helpful.  This woman needed a hand crossing the street. 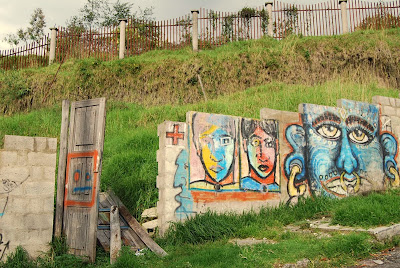 You know me--I love the falling down stuff and I think this public art is as important as the expensive, commissioned stuff.

I discovered I had a little more than I wanted to put on one post and I think they're all photos of kids.  You knew I had to do it, right?
Posted by Cynthia at 1:21 PM 2 comments: